It is not easy to answer this question, because our history is made up of pieces of many small stories, which at a certain point cross each other and get together to tell what we are today.

So let’s try to make a small historical picture, starting from the early 40s of the twentieth century when the movements of tourists visiting the Gulf of La Spezia were served by the vaporetti – steam boats – which were mainly used for the transport of workers.
Some small tourist excursions were made by small boatmen as well as local fishermen, but in the last years of the second post-war period the situation began to change. In fact, when the transport of workers started to lessen, only the tourist traffic remained concentrated in the summer season, which, however, being in strong growth, led the municipality of La Spezia to create the FI.TR.AM, a real maritime section equipped with means of navigation that united the main towns of the Gulf of La Spezia, Lerici and Portovenere and subsequently also the Palmaria Island.

Over the years, however, given the non-economic social policy undertaken by the company, there were economic deficits, which affected the municipal budget of La Spezia.
In this historical context, we must mention some characters who made fundamental choices for our history, due to the growing influx of tourists to La Spezia and its Gulf. These characters are the commander Giuseppe Baracco, former commander of FI.TR.A.M boats, who in 1954, with extraordinary intuition, decided to go on his own and start a connection service from Lerici to Portovenere and the Cinque Terre.

The initiative was very successful and in its wake also other characters from Portovenere. For example we can mention Walter Bello and Vittorio Gianardi, in 1968 they began a boat service from Portovenere to the Cinque Terre, in 1977 also from Grazie, Luigi Bello and Angelo Romeo began their activities. Other small shipowners instead moved from the Cinque Terre harbors towards Portovenere and Portofino, these were the Rossignoli brothers Agostino and Luigi and the Monterosso Navigation Company, established in 73 by Agostino and Giovanni Poggi, Lorenzo Betta and Luigi Moggia. 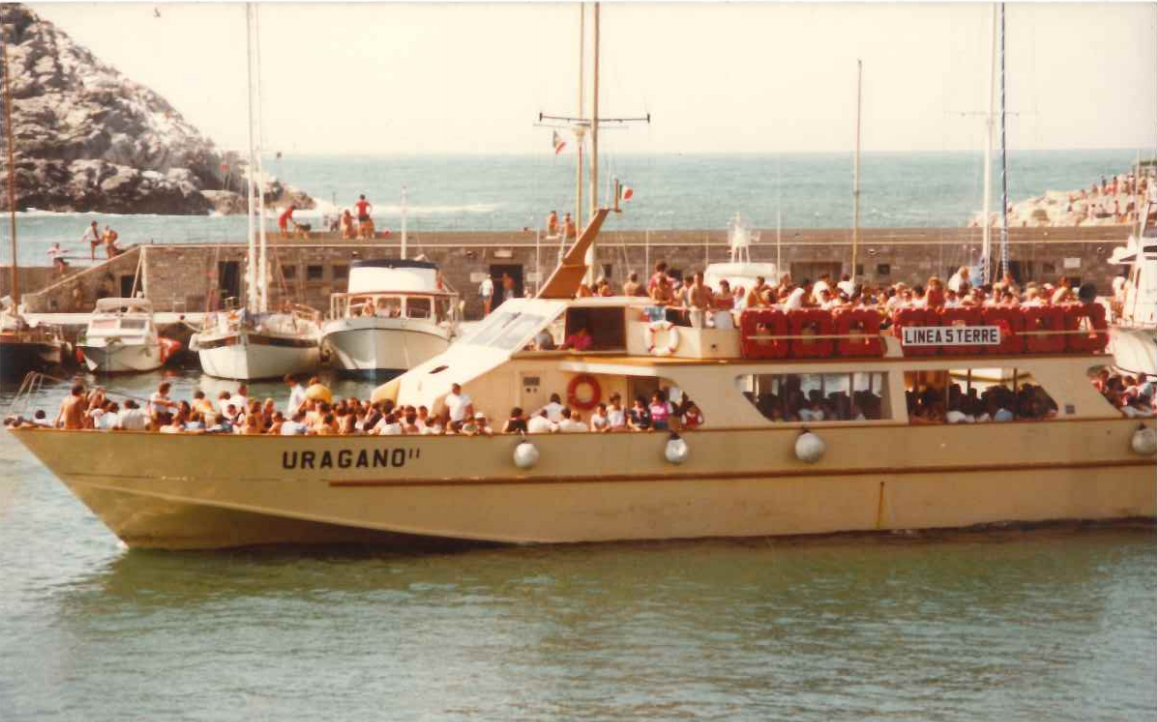 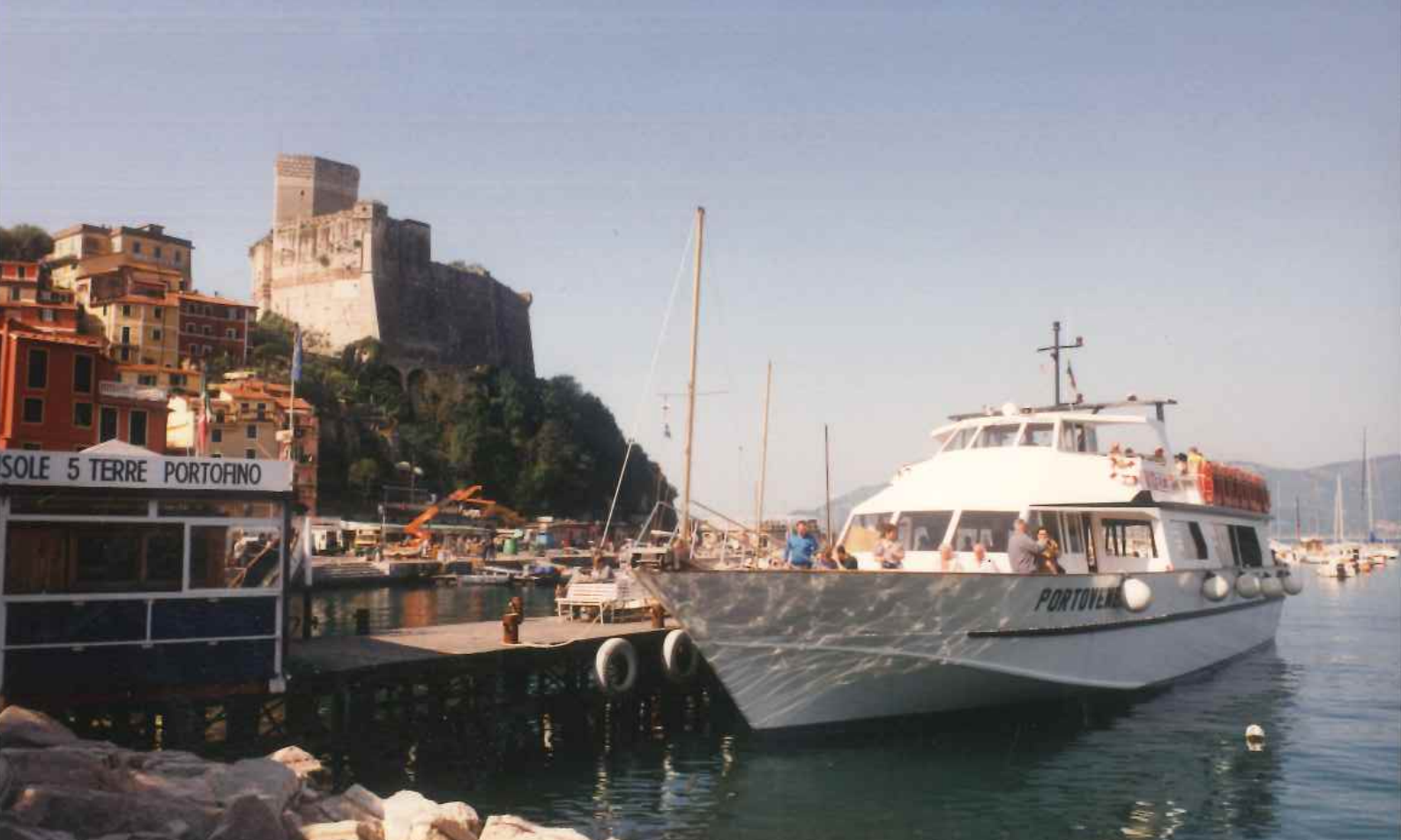 Over time these small shipowners began to associate with each other and specifically Alessandro Piermatteo, Vittorio Gianardi, Agostino and Luigi Rossignoli and Lorenzo Betta gave birth in December 1979 to the Navigazione Golfo dei Poeti based in Lerici, a few months later also Giuseppe Baracco himself merged into the same. In 1981 other boatmen from Portovenere Carlo, Mario and Gino Baracco, Walter Bello, Bruno Caprini, Carlo Sturlese and Giovanni Traverso also joined. At the beginning of 1982 Antonio Clerici took over the navigation from the Rossignoli brothers, as did the Navigazione Monterosso of Agostino Poggi, Angelo Poggi, Gino Moggia and Luciano Cavallo. The Navigazione Golfo dei Poeti became operational in April 1980, the founding members put their vehicles at service and began to carry out tourist services from March to October, focusing on the Spezia, Lerici, Portovenere, Islands Tour lines, the service for the Cinque Terre and going as far as Portofino once a week.

In 1976 the ATC was born, to which the province and all the municipalities of La Spezia joined, this body in a short time managed all public transport in the area and so in April 77 the aforementioned company created the IN.TUR. , a joint-stock company with public capital that managed all tourist transport in the gulf and beyond. There was thus a radical change in the services carried out by the old FI.TR.A.M and the connections were concentrated above all on the La Spezia – Lerici – Portovenere and Isola Palmaria line. The development of the other tourist lines was thus left to the emerging shipowners, because they were judged unproductive. Over the years, it focused more and more on seasonal transport with the MN Albatros I and Cormorano, but for management reasons in 1993 it was incorporated into Navigazione Golfo dei Poeti srl.
Other shipowners began to carry out tourist services at the end of the 1980s, such as the Verde Azzurro di Santerenzo company of Marco Mazzoni and Ugo Bernardi. Tommaso Baracco, son of the aforementioned Giuseppe, set up the Baracco Line, and finally the Viamare srl of Domenico Pollicardo & C.

After a few years of competition, they too merged into the Gulf of Poets Navigation, which slowly grew significantly. The Battellieri del Golfo also joined the company and shortly afterwards the service from Versilia began together with the Ligurian Tirrena by Rossignolis, thus giving life in 2000 to the Cinque Terre Golfo dei Poeti Maritime Tourist Consortium.